Exploring the next major gold district on the Cortez Trend, Nevada

The Keystone project is a Carlin-type gold deposit exploration project located on Nevada's Cortez Trend, one of the world's most prolific gold mining trends and home to some of North America's largest mines. The Keystone project is an under-explored, early-Tertiary (34.1+/-0.7 Ma), complex intrusive-centered, large gold-bearing hydrothermal system developed in domed permissive, lower-plate, carbonate host rocks. U.S. Gold Corp. has consolidated this entire prospective gold Cortez Trend district currently with 20 square miles of mineral rights control. This is the first time in history of the district that both the entire district has been consolidated by one company, and is being evaluated by systematic, comprehensive, model-driven exploration. U.S. Gold Corp.'s work to date on the project has illustrated many similarities between Keystone and some of the major mines on both the Cortez and Carlin Trends in Nevada - with evidence of similar stratigraphy, lithologic characteristics, structure, and alteration - factors important to the discovery of significant Carlin-type deposits. 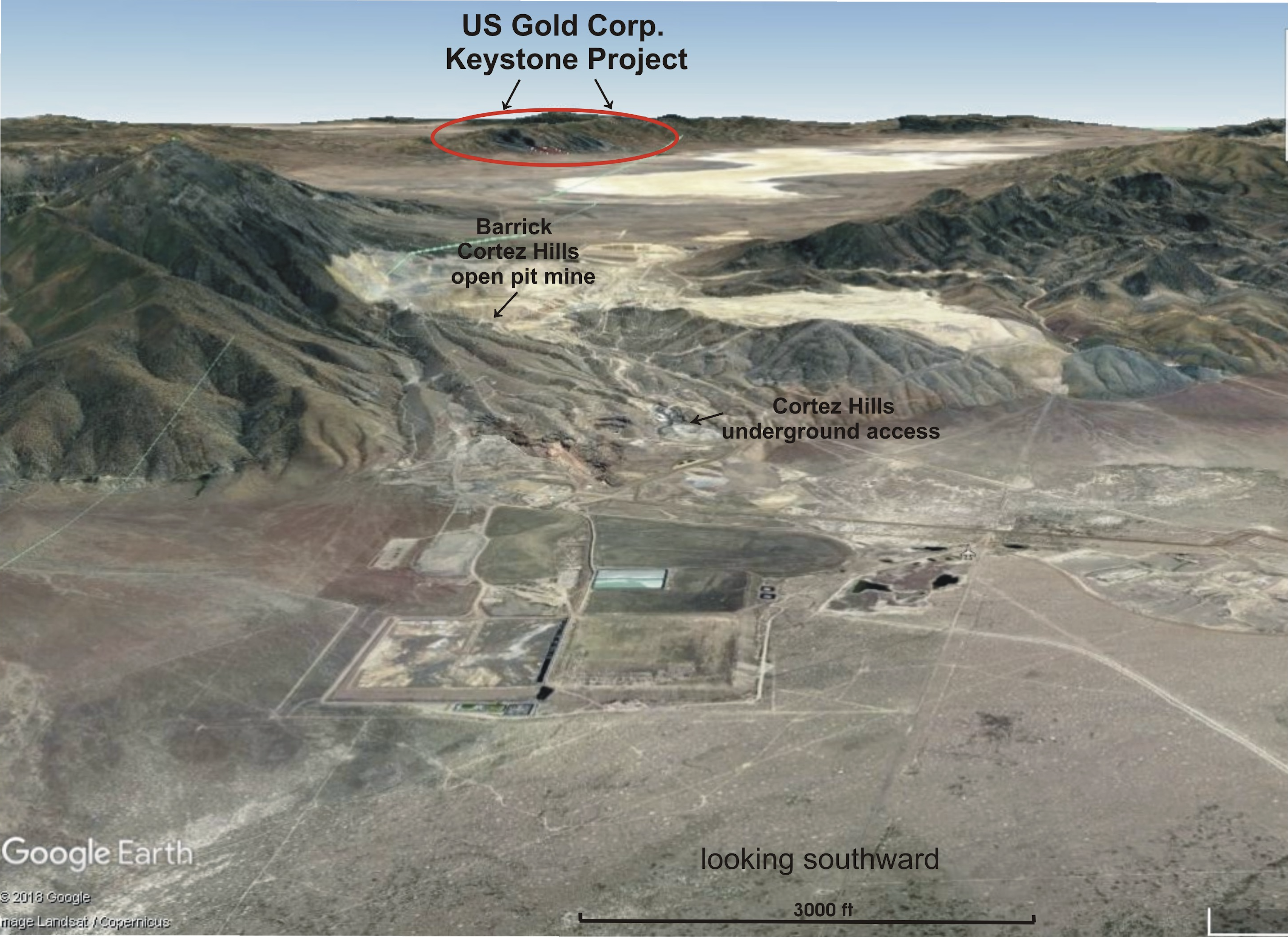 Prior to U.S. Gold Corp.'s consolidation of the district, a number of mining companies drilled approximately 240 holes, to an average depth of about 300 feet, at various localities within the Keystone project area. These earlier property positions were fragmented and isolated with multiple owners and district-wide exploration programs were inhibited. The Keystone project's geology and prospectivity has historically been poorly understood and certainly under-appreciated and, during these earlier days, there was little available comparison reference to the magnitudes and importance to the Pipeline, Cortez Hills, Goldrush gold systems and deposits. Most of the prior Keystone drilling consisted of typical 1980's drilling - conventional and RC drilling looking for shallow oxide, gold mineralization. Nevertheless, some of the historical drilling did encounter some good gold grades and local thick intercepts of gold.

Since consolidating the district, U.S. Gold Corp. has been highly active in implementing systematic exploration programs which have consisted of gravity surveys, rock, soil, stream sediment and altered cobble surveys, a detailed geological mapping program, and multiple "scout" drill programs in 2016 and 2017. The exploration results to date have identified large areas of strong, widespread gold and pathfinder geochemistry in the soil and rock samples and that a very large epithermal gold system is present. Most of these very wide-spaced scout drill holes, to date, intersected thick intervals of permissive host rocks at shallow target depths and thick intervals, albeit low levels, of gold and associated, locally strong, pathfinder metals. These drill holes have also confirmed the presence of permissive Devonian Horse Canyon limy siltstone, Wenban limestone Formations, and Roberts Mtn Formation host rocks. These Keystone host rocks are very similar in character and thickness (an approximate composite 3,000 feet) to the Pipeline, Cortez Hills, and Goldrush deposits located just to the north of Keystone. The extent and severity of the alteration and the thickness of permissive rock packages encountered, and presence of large collapse breccia bodies highlight the potential of this district scale characteristic of the mineral system.

2018 drilling comprised of fifteen holes, and was conducted in two phases. All of the holes encountered moderate to thick intervals of anomalous gold with moderate to locally very strong associated pathfinder metals, while many of these also intersected significant gold assay intervals. Drilling at Keystone continues to show all of the right ingredients are present for big, Carlin-type, gold deposits. Seeing strong anomalous gold in the latest drill holes only strengthens that theory. Finding the right structure and feeder zones that would host these styles of big deposits is now the focus of our 2019 program. In 2019, with the approval of the Environmental Assessment from 2018, we were able to design a drill program specific to target assessment with multiple stage drill hole follow-ups.  The Keystone 2020 exploration program has been designed and it is anticipated will commence in the summer.