U.S. Gold Corp. began a drilling campaign in July of 2021 consisting of 48 holes and 40,930ft. (12,475m), comprised of reverse circulation, rotary and core drilling. The primary purposes of this campaign are to continue to refine hydrologic and geotechnical subsurface conditions, and minor exploration immediately southeast of the proposed project. Thirteen monitoring wells totalling 5,600 feet are proposed for sub-surface groundwater studies. The 2021 field season ended at the end of November and assay results are expected in 2022.

In October of 2020, U.S. Gold Corp. completed a drill program at the Project. Part of that work included surveying new drill hole collars and historical drill hole collars U.S. Gold Corp. was able to locate in the field and flag. All historical collar coordinates (pre-2020) were loaded into a handheld GPS unit and visited in the field. Those that were clearly identifiable (cement, tags, drill pipe, etc) were flagged with a lath and flagging, with the hole name written on the lath. These collars were then surveyed at the same time as the 2020 holes, on October 21st, 2020. Surveying was completed by Topographic Land Surveyors of Casper, WY and the results certified by Professional Land Surveyor Aaron Money, #14558. Survey method was Real Time Kinematic GPS using a Trimble R10 GNSS GPS system. Drill hole collars from each of the historical programs dating back to 1938 were identified in the field and resurveyed confirming the locations recorded in the drilling database. Comparison of the new collar surveys with the old coordinates showed small variability in X and Y coordinates, typically less than 5 feet and around 25 ft at most, and a bit more in elevation (around 25 ft at most). Two permanent survey control points were placed on the project for future use.

U.S. Gold Corp. completed two RC drilling programs in 2017 and 2018. RC drilling was comprised of four holes in 2017 and eight holes in 2018, totalling 12,040ft. (3,670m). Both programs were designed to investigate magnetic and IP anomalies generated by geophysical surveys. Drilling was completed by AK Drilling of Butte, Montana using a Foremost MPD 1500 RC drill. Samples were collected on 5ft. (1.5m) intervals from the discharge of a rotary splitter attached to the drill. A chip tray was also filled from cuttings for geologic logging and archived. Samples were delivered to Bureau Veritas of Sparks, Nevada for analysis.

U.S. Gold Corp. completed an eight-hole, 2018 Fall drill program that was designed to further assess the westward extension of the CK Gold Project deposit, that was initially intersected within the 2017 step out hole, CK17-01rc. The 2018 drill program was successful in confirming this extension, encountering multiple, thick zones of copper, gold, zinc, and silver mineralization in five of the eight drill holes (click here for drill results table). The thick mineralization zones occur within a quartz, biotite schist within a zone of about 200 meters long, east-west dimension, and at least 120 meters wide, north-south, and to depths similar to the historic modeled deposit (see drill plan map). This new mineralization also appears to remain open to the south, and potentially to the north. U.S. Gold Corp. is building an expanded exploration model for the CK Gold Project deposit. This model is designed to look more thoroughly at the deposit, especially with respect to its boundaries, internal high-grade zones, and the other metals of value which appear to be present. With this new model in hand, additional exploration efforts to enlarge and prospectively enhance the deposit value will be conducted. 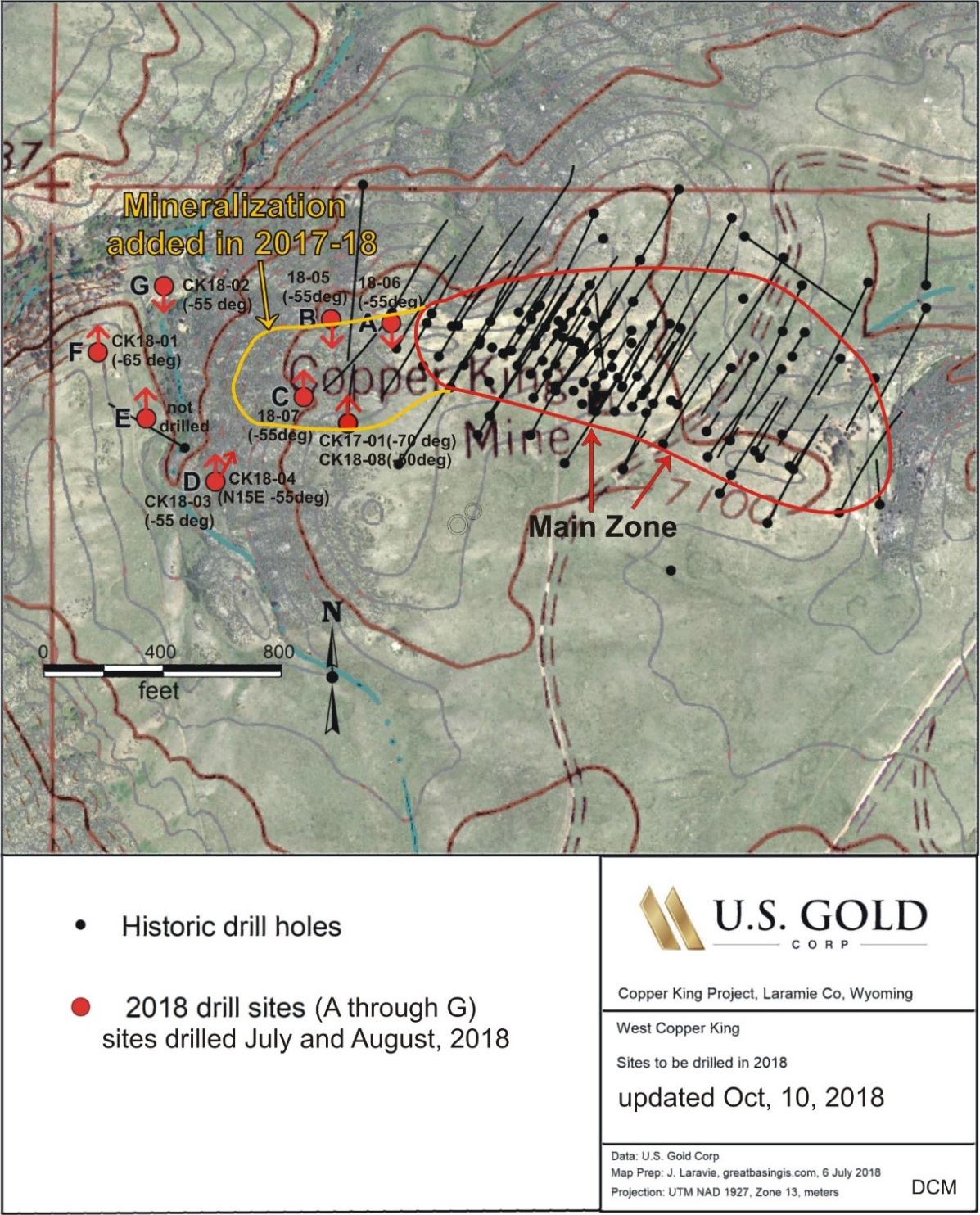 Since 1938, at least nine historical (pre-U.S. Gold) drilling campaigns, by at least seven companies plus the U. S. Bureau of Mines, have been conducted at CK Gold Project. The most recent drill activity was in 2007 and 2008 when Saratoga Gold completed 35 diamond core holes totaling 7,762m. Prior to Saratoga, 96 known drill holes for an approximate total of 11,898m were completed on the CK Gold Project property. There are only limited, third-party references to four of these historical holes, six other pre-Saratoga holes are outside the resource area. 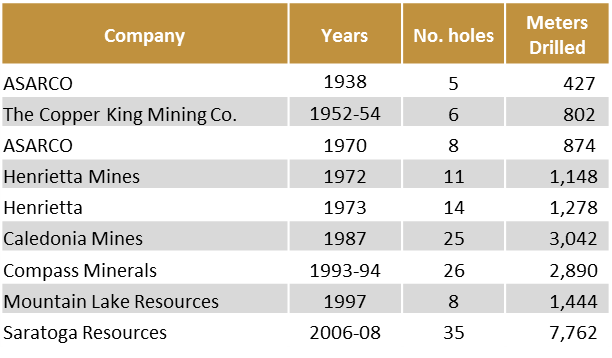