U.S. Gold Corp.'s Vice President and Head of Nevada Exploration, Dave Mathewson stated, "Our intent was to complete a scout drill-hole campaign at Keystone to investigate the stratigraphy and extent of alteration within 6 unique areas of the project. Early winter conditions in 2016 forced us to complete the last 4 holes of this program this summer. Keystone has never been systematically explored using modern exploration techniques with a model driven approach in its history, as such these holes were vital to gain an understanding of the rock formations and alteration characteristics in the district. We chose these locations through our first phase geophysics and geochemistry surveys. The results of this drill program have been encouraging. The extent and severity of the alteration encountered and the thickness of permissive rock packages combined with the shallow depths they were encountered and Keystone's structural complexity highlight the potential of this district scale mineral system. The drilled intercepts bare many similarities to world-class gold deposits located on the north Carlin Trend and neighboring Cortez Trend deposits.

Hole Key17-03rc for example (summaries and map below) is indicative of the size of the system. It encountered extraordinarily thick sections of permissive host rock and ultimately gave us a strong vectoring direction to what we anticipate to be much better mineralization.  There was an upper 705ft thick gold anomalous zone in Horse Canyon, and perhaps more importantly a 190ft thick zone of strongly anomalous gold in the lower Wenban, along with very indicative associated Carlin-type alteration. This zone remains completely open in essentially all directions, and we are now going to intensify our surface geochemistry and geophysics in this area.

We are currently designing a fall drilling program that will include the first vectoring drilling phase in the Key17-01rc through 03rc target area.  This target location is one of several that we have identified within the Keystone project as we continue the hunt for large Carlin-type gold deposits.

Hole Key17-1c was a core hole drilled to 1605 feet (489 meters) to complete the scout drilling program that was started but not completed late in 2016 because of winter conditions.  The hole was drilled to provide an initial test at a location within the largely undrilled eastern flank of the Keystone project.  This locality is comprised of anomalous surface geochemistry at the margin of a major structural zone indicated from gravity interpretation.  No subsurface geologic information from any historic drilling existed within a mile of this hole.  Key17-1c encountered granodiorite intrusive, of probable early Tertiary age, at collar to 92 feet, then locally hornfelsed upper plate argillite, sandstone and siltstone to 359 feet interpreted to be upper-plate rock.  Scattered weak gold anomalies up to 0.079ppm were encountered in this interval.  From 359 to 971 feet moderate to strongly silicified lower-plate Devonian Horse Canyon was encountered containing scattered anomalous gold up to 0.031ppm to 971 feet.  From 971 to 1403 feet variable pyrrhotite-pyrite-magnetite skarn and hornfelsed Devonian Wenban was encountered.  Hornfelsed limestone of either Wenban or Roberts Mountain Formation limestone protolith was encountered near the bottom of the hole to 1605 feet.  Scattered, weakly anomalous zones of copper, lead and zinc were present within the skarn and hornfelsed zones.

Approximately one mile to the southwest, three vertical reverse circulation holes were drilled in June and July, 2017 to provide a first-pass assessment of another large anomalous area of surface gold, arsenic and other metals in rock and soil samples.  Non-permissive, but locally altered, upper-plate rock is exposed over most of the surface in this area.  Depth to the highly permissive lower-plate carbonate stratigraphy was essentially unknown in this area because of a lack of previous drilling.  However, U.S. Gold Corp. did have some information from 2016 vertical core hole, Key16-03c, drilled to 753 feet, and terminated because of difficult drilling.  Key16-03c contained anomalous gold up to 0.217ppm, with moderately strong pathfinder metals in strongly oxidized and broken, silicified upper and lower-plate rock units. This hole, and nearby historic hole 89-2/90-1, provided sufficient gold system indications to be followed-up with three recently completed holes, described below.  Non-permissive upper-plate rock units tend to obscure and provide a cap to hydrothermal system effects and metallization within the underlying lower-plate rock units. 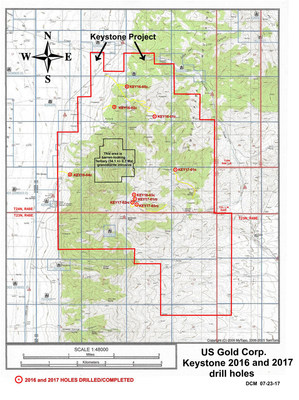 Vertical Hole Key17-02rc drilled to 1820 feet (555 meters) was a 500 foot offset to the south-southwest of Key17-01rc.  This hole intersected very altered, permissive Devonian Horse Canyon Formation from 40 to 580 feet that included two thin dacite dikes or sills from 270 to 285 feet.   Approximately 60% of the Horse Canyon was anomalous (>10ppb) in gold in multiple zones up to 0.080ppm with associated moderately anomalous arsenic, antimony, mercury and zinc.  Multiple thick zones of anomalous gold, up to 1.05ppm, were encountered within the underlying variably altered Wenban Formation limestone.  Roberts Mountain Formation limestone appears to have been intersected in the last 20, or so, feet of the hole.

Vertical reverse circulation Hole Key17-03rc drilled to 1940 feet (591 meters) was a 700 foot, south-southeast offset to hole Key 17-01rc.  Altered Horse Canyon calcareous siltstone was encountered to 950 feet.  A 705 foot thick zone of anomalous gold (>10ppb) up to 0.731ppm, with locally very anomalous arsenic up to >10,000ppm, antimony up to 196ppm, and mercury up to 61ppm is present within the Horse Canyon unit.  Several dacite intrusives, probably intruded as sills into collapse breccia, were encountered between 160 and 340 feet and again 805 and 830 feet.  Geochem values, including gold, tend to significantly spike in proximity to these sills.  Local abundant visible realgar had been observed in cuttings.  A 190 foot thick strongly anomalous gold, up 0.320ppm, and pathfinder mineralized zone is present within a 200 foot thick breccia in the lower Wenban limestones within this hole.

The above described, initial three-hole reverse circulation program provided a partial test of an open-ended, large zone of anomalous surface geochemistry coinciding with a gravity-data-interpreted north-northwest structural-intrusive zone referred to as the Sophia target area.   Very thick zones of Carlin-style, epithermal mineralization and alteration comprised of decalcification, silicification, and brecciation were encountered in all three holes.  Open-ended, southeastward-most hole Key 17-03rc is significantly more encouraging than Key 17-01 and 17-02, and it is probable that this mineralization characteristic is providing a direction to vector toward more significant gold mineralization.

The Devonian Horse Canyon calcareous siltstone and Wenban limestone units are two of the three primary host rock units that includes Roberts Mountain Formation in the Pipeline and Cortez mining area, controlled by Barrick Mining Co., on the same structural trend, 10 to 20 miles to the north-northwest of Keystone.  Detailed geological studies, including age-dating, conducted by the U.S. Gold Corp. geological team at Keystone have recognized very close similarities to the prospective host rocks of the Cortez area with those at Keystone.  Further, it appears evident that the Keystone project is comprised of a very expansive gold-bearing hydrothermal system within a complex lower-plate dome cored by a very complex early Tertiary intrusive system of fine-grained to coarse-grained felsic to mafic intrusives as stocks, dikes and sills.  Of primary importance at Keystone are the now evident very thick altered and drill-indicated gold mineralized zones and very permissive host characteristics of the prospective Horse Canyon (Carlin Trend Rodeo Creek Formation equivalent) and Wenban limestone host units.  Both these units are being encountered in our drill holes at the surface and, or at shallow exploration depths.  In addition, large zones of epithermal-type alteration and mineralization, including gold, are being encountered within dike and sill intruded collapse-style breccia bodies at Keystone.  Additional surface work is currently in progress in preparation for more precise targeting and conducting a follow-up drilling program beginning this Fall.

Safe Harbor
The information provided in this press release may include forward-looking statements relating to future events, such as the exploration success of U.S. Gold Corp., development of new Dataram products, pricing and availability of raw materials or the future financial performance of the Company.  Actual results may differ from such projections and are subject to certain risks including, without limitation, risks arising from: changes in the price of gold and mining industry cost inputs, memory chips, changes in the demand for memory systems, increased competition in the memory systems industry, order cancellations, delays in developing and commercializing new products, risks with respect to U.S. Gold Corp. faced by junior companies generally engaged in exploration activities, and other factors described in the Company's most recent Annual Report on Form 10-K, Quarterly Reports on Form 10-Q and Current Reports on Form 8-K filed with the Securities and Exchange Commission, which can be reviewed at www.sec.gov.  The Company has based these forward-looking statements on its current expectations and assumptions about future events.  While management considers these expectations and assumptions to be reasonable, they are inherently subject to significant business, economic, competitive, regulatory, and other risks, contingencies, and uncertainties, most of which are difficult to predict and many of which are beyond the Company's control.  The Company does not assume any obligations to update any of these forward-looking statements.