Very little core drilling was done in the historic Keystone district drilling programs and none of this core was available for examination building exploration understandings.  Of the approximately 150 holes previously drilled to an average depth of about 300 feet, many were conventional rotary holes or reverse circulation holes.  Much of this drilling was conducted in a period of time looking solely for near surface oxide gold deposits, and at a time of gravimetric fire assay determinations that provided approximately 1 gram gold detection.

The US Gold Corp. 2016 Keystone drill program was comprised of 5 vertical PQ reduced down to NQ (when necessary) core holes for a total footage of 7,342 feet (2,238 meters).  All holes except Key16-03c were completed to their desired target depth.  Hole Key16-03c was lost as a result of encountering very strong clay and silica alteration and an inability to keep the hole open for ongoing re-entries.  This target area will receive additional drilling assessment in early 2017. 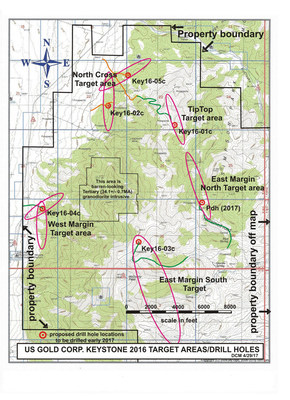 The following provides brief summaries of each hole. Please refer to accompanying Keystone map for locations:

Key16-01c was drilled to 1519 feet in the Tip Top Target zone.  Upper plate rock was encountered through 354 feet, then into a moderately altered calcareous siltstone, probably Devonian Horse Canyon Fm.  A strongly deformed, argillized and silicified zone was encountered at 672 feet to 707 feet, possibly a low-angle, large-scale slide structure, and Devonian Wenban limestones at 732 feet.  Several roughly flat-fabric breccia zones, and 9 individual, thin to several feet thick, dacite sills were encountered to bottom of the hole at 1519 feet.  The structural character, alteration, breccia fabric, and sills suggest this hole is distal to, but may be on the edge of a prospective dissolution-formed collapse breccia body.   Upper Roberts Mountain Formation limestone may have been intersected at the very bottom of the hole.  From the top, to nearly the bottom of this hole, anomalous zones of gold, greater than 10ppb, up to 5 feet of 1.74 g Au, with closely associated anomalous zones of arsenic, antimony, mercury and zinc.

Key16-02c was drilled to 1742 feet in the northern Range Front Target zone.  The upper portion of this range-margin zone was highly faulted.  Very broken, jasperized, and calcite-veined limestone was encountered to 260 feet, below this zone to 440 feet very broken, silicified Horse Canyon was encountered, and below this to 746 feet was very broken Wenban with local abundant calcite veining.  Mixed sulfidic marbleized and hornfelsed, relatively uniform, nearly flat-lying Roberts Mountain Formation was intersected at 746 feet to 1638 feet, equigranular, medium grained granodiorite of the Walti pluton was intersected at 1638 to the bottom of the hole at 1742 feet.  Sparse, anomalous gold with anomalous pathfinder geochem was encountered in only the upper portion of the hole primarily within Horse Canyon Formation.

Key16-03c  was drilled to 753 feet.  This hole was a drilling battle from the surface to where the hole was lost at 753 feet. The rock was broken, iron oxide-rich, locally silicified , and locally strongly argillized to massive, sticky clay.  Our interpretation suggests we were in upper-plate sandstone and argillite to the bottom of the hole.  A dike of altered granodiorite was encountered between 251 and 293 feet.  From about 630 to bottom of the hole at 753 feet, the rock was altered almost beyond recognition by clays and silicification.  This zone was also moderately but almost consistently anomalous in gold up to 113 ppb, and was accompanied by moderate to strong pathfinder metals including, arsenic to 1115 ppm, antimony to 225 ppm, mercury to 5 ppm, and zinc to 3640 ppm. The bottom of the hole was a mess and also quite anomalous in magnesium, chromium, and cobalt.  This hole is located within an apparent sizeable zone of alteration, which also includes historic hole 89-2/90-1; a 4.2 foot-oz (45m-gm) grade-thickness hole located about 200 feet north of Key16-03c.  This prospective target zone, that appears to continue a considerable distance to the southeast, will be followed up as soon as access allows in 2017.

Key16-04c was drilled to 1668 feet.  Similar to the western range-margin hole, Key16-02c, to the north, this hole appears to have also encountered some major faults and displacements along this portion of the range margin.  It appears that, consistent with nearby outcroppings, this hole intersected Devonian Horse Canyon below colluvium at 43 feet, and fairly unaltered but contorted Wenban interval from 98 feet to 533 feet, a 204 foot thick jasperoid zone was encounterd from 533 to 737 feet.  This jasperoid is weakly anomalous in gold, 10 to 79 ppb, with anomalous arsenic, mercury and antimony. The limestone below this jasperoid is weakly sulfidized and calcite stringered Silurian Roberts Mountain Formation.  The hole bottomed in weakly hornfelsed Roberts Mountains limestone.

Key16-05c was drilled to 1660 feet. This hole intersected upper-plate shale and mudstone to 530 feet and then broken, locally brecciated and silicified Horse Canyon to a highly silicified and sulfidized altered, broken zone from 965 to 1050 feet.  The upper-plate and Horse Canyon are locally anomalous in gold in the 10 to 50 ppb range with also anomalous arsenic, mercury, antimony, and zinc.  What is believed to be Wenban was encountered at 1050 feet.  The Wenban is abundantly anomalous in gold at levels of 10 to 52 ppb.  What appears to be Roberts Mountain Formation was encountered from about 1600 feet to the bottom of the hole.

Based on the overall results, a structural, alteration, and geochemical vector toward the east flank of the project seems evident.  The first planned hole for 2017, Key17-1c is a proposed vertical core hole sited within the East Margin North Target area of the broader primary north-northwest-trending Cortez structural trend.  This hole is also specifically sited in an area of strongly anomalous pathfinder surface geochemical indicators.   This hole is sited about one mile from the nearest known previously drilled hole.

Conclusions from the 2016 drilling program:

About US Gold Corp.

Dataram is an independent manufacturer of memory products and provider of performance solutions that increase the performance and extend the useful life of servers, workstations, desktops and laptops sold by leading manufacturers such as Dell, Cisco, Fujitsu, HP, IBM, Lenovo and Oracle. Dataram's memory products and solutions are sold worldwide to OEMs, distributors, value-added resellers and end users. Additionally, Dataram manufactures and markets a line of Intel Approved memory products for sale to manufacturers and assemblers of embedded and original equipment. 70 Fortune 100 companies are powered by Dataram. Founded in 1967, the Company is a US based manufacturer, with presence in the United States, Europe and Asia. For more information about Dataram, visit www.dataram.com.

The information provided in this press release may include forward-looking statements relating to future events, such as the exploration success of US Gold Corp., development of new Dataram products, pricing and availability of raw materials or the future financial performance of the Company.  Actual results may differ from such projections and are subject to certain risks including, without limitation, risks arising from: changes in the price of gold and mining industry cost inputs, memory chips, changes in the demand for memory systems, increased competition in the memory systems industry, order cancellations, delays in developing and commercializing new products, risks with respect to US Gold Corp faced by junior companies generally engaged in exploration activities, and other factors described in the Company's most recent Annual Report on Form 10-K, Quarterly Reports on Form 10-Q and Current Reports on Form 8-K, including  the Risk Factors with respect to U.S. Gold Corp. contained in the Current Report on Form 8-K filed on May 23, 2017, filed with the Securities and Exchange Commission, which can be reviewed at www.sec.gov.  The Company has based these forward-looking statements on its current expectations and assumptions about future events.  While management considers these expectations and assumptions to be reasonable, they are inherently subject to significant business, economic, competitive, regulatory, and other risks, contingencies, and uncertainties, most of which are difficult to predict and many of which are beyond the Company's control.  The Company does not assume any obligations to update any of these forward-looking statements.

To view the original version on PR Newswire, visit:http://www.prnewswire.com/news-releases/us-gold-corp-provides-2016-keystone-drill-program-summary-and-update-300472224.html